3 Tips to Connect with your Teen

3 Tips to Connect with your Teen

Communication is a basic day-to-day task for everyone. Whatever language one may speak, words are used to convey our thoughts and feelings, to transmit a message or to tell a story. Babies coo and cry, kick their legs and chuckle. That’s their language. As they grow, their command of verbal language develops and before you know it, they chatter happily with all and sunder.

But as the teenage years arrive, the once upon a time chatter-box becomes a grunt-box. Sounds become their language. Exasperating and frustrating for parents who bemoan the fact that their teenagers do not have conversations with them anymore. And because of that, they’re often in the dark about the well-being and personal lives of their offspring.

Sometimes it feels like you’ve got a stranger in the house! But deep down, teens have needs that are crying out to be met. A sense of security, belonging, confidence and self worth are but some basic ones. With two teens at home, I’ve had my fair share of pitfalls and small victories in my relationship with them. It gets easier as I win their trust. Here are some things I keep in mind…

Who would think “ig” doesn’t mean “IG”? Case in point. (All through text message)

Me : Hey, I wonder who’s in the cast of that movie. Should I google?

We had a good chuckle and she showed me a text exchange between her friend and her. Being schooled in the teens lingo can be frighteningly exciting because it opens up a whole new world of communication with them. Exciting! But frightening because some words… uh, uh. No go!

We listen … with our hearts.

Plunging headlong into a sensitive subject is like harakiri. (And I’ve committed it countless times). Unless and until we establish a relationship with them, teenagers often find it hard to open up as they are at a stage in life where exerting their individuality can be a dicey affair. They feel judged and scrutinized when parents comment on their choice of clothes, hairstyles, friends etc. Choosing our battles and leaning in on the major issues is the way to go.

Sometimes, the red hair or belly piercing is but their way of soliciting some much needed attention. Taking an interest in their lives can start with putting our phones away.

Show them they are important enough for us to shut off the world. Watch their body language as they talk about their friends and hobbies; hear the unspoken words as they change their tone of voice when they talk about that new guy at school or the girl at basketball. Did his expression darken when he jokingly told you how he enjoys being alone? Or did her eyes shift furiously when she spoke of the boy who sits too close at tuition class?

We’re on their side.

Teenagers with their bravado are brave… to a certain point. Beyond that, the wisdom of the world cannot replace the solid, secure love from their parents. Some may find out the hard way but when they come to a realization of that pure love from home, they’ll come running.

The five love languages is a good starting point to cultivate that assurance. Gifts, time, words of affirmation, acts of service or a hug – one of them will speak to the teenager – and when that happens, you can be certain they’ll open up.

All said and done, honest relationships and true friendships are what our teenagers crave. Sometimes I take stock by asking if I would speak to my “mother-self” if I was a teenager navigating today’s world of gossip, lies and back-biting….or would I rather speak to the guy who readily replies my text messages even at midnight?

An open channel of communication paves the way for open and honest chit-chats. Grace, humility, forgiveness and love will go a long way in keeping that channel crystal clear. 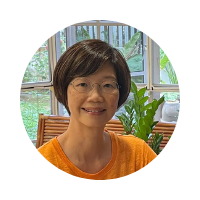 A mother of 3 who is a rusty musician, amateur baker and tree hugger – Hung Lan draws inspiration from nature and finds joy in deep conversations and a good book.